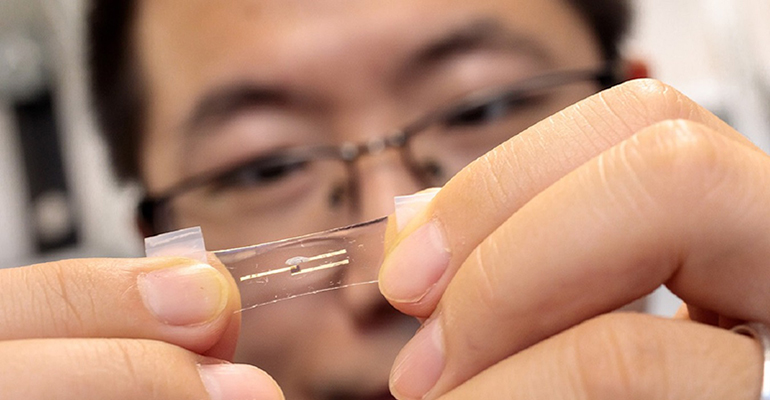 The wearable medical device market is growing at just over 27% per year and is expected to reach a value of $174 billion by 2030, according to business intelligence firm Market Research Future. Given the technology’s potential to provide 24/7 health monitoring and diagnostics, its future growth could even extend far beyond these numbers. The U.S. Department of Energy’s Argonne National Laboratory, in collaboration with the University of Chicago’s Pritzker School of Molecular Engineering (PME), is helping to make that future a reality by developing a skin-like device to a “high-tech medical center”. at your disposal and instant call.

Future wearable electronics could potentially detect emerging health conditions even before obvious symptoms appear, suggests a press release from Argonne National Laboratory. The devices could also perform personalized analyzes of tracked health data while minimizing the need for it to be wirelessly transmitted.

Collecting and processing such a large amount of data at very low power consumption in a tiny space requires a technology called neuromorphic computing, the researchers said. Based on artificial intelligence (AI), the technology mimics how the brain works by training on previous data sets and learning from experience. Its benefits include compatibility with stretchable materials, lower power consumption, and faster speed than other types of AI, the press release said.

The other major challenge the team faced was integrating the electronics into a stretchy, skin-like material. The semiconductors used in today’s rigid electronic devices such as cell phones are normally a solid silicon chip. No matter how technologically advanced the wearable is, it is well known that if the device is uncomfortable to wear, user adoption drops precipitously. In addition to being conductive, the material used for the semiconductor had to be very flexible.

The research team’s skin-like neuromorphic chip consists of a thin film of a plastic semiconductor combined with stretchy gold nanowire electrodes. Three types of plastic were used in the construction, said researcher Sihong Wang. plastics today: “A type of conjugated polymer with semiconductive and ion-conductive properties, which has been designed with extensibility through our research; an organo-hydrogel as an electrolyte; and a polydimethylsiloxane (PDMS) elastomeric substrate. Even when the device is stretched to twice its normal size, it performed as expected with no cracks forming.

To test the concept, the researchers built an AI device and trained it to distinguish between healthy electrocardiogram (ECG) signals from four different signals indicative of health issues. After training, the device was more than 95% efficient in correctly identifying ECG signals.

Exposure to an intense X-ray beam revealed how the molecules that make up the device’s skin-like material rearrange themselves by doubling in length. These results provided molecular-level information to better understand the properties of the materials, Argonne National Laboratory said.

2022-11-18
Previous Post: My Foreo Microcurrent skin tightening device is 30% off for Black Friday
Next Post: Impact of ruxolitinib cream on the quality of life of patients with atopic dermatitis