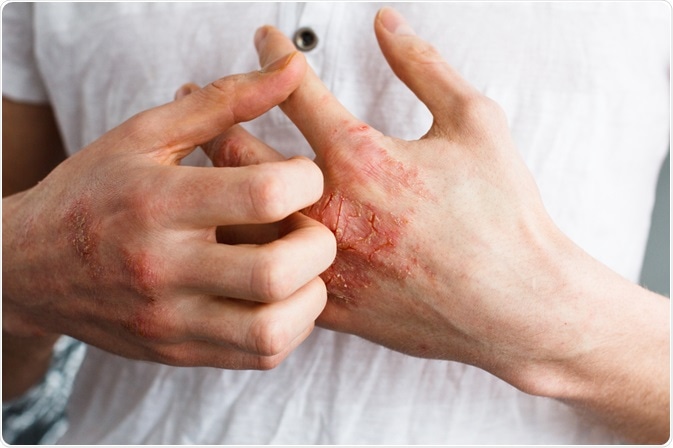 There are several types of skin problems, which can be caused by genetic diseases, allergies, irritants or a weakened immune system. In addition, skin problems can be associated with certain diseases.

Acne is the most common type of skin problem characterized by pus-filled bumps/patches on the skin. The spots appear mainly on the face; however, acne can also appear on the back, shoulders, chest, and neck.

During puberty, altered hormone levels trigger the production of sebum, which can block hair follicles. Additionally, dead skin cells clog the follicle, causing painful bumps to form on the skin.

Human skin contains a type of bacteria called Propionibacterium acnes. In people with acne, the buildup of oil on the skin provides an optimal environment for these bacteria to grow rapidly and multiply. This causes the skin to become inflamed and pus-filled bumps to form.

Acne can be treated with a variety of over-the-counter and prescription medications. Topical formulations containing benzoyl peroxide or salicylic acid tend to be the first treatment choice and can provide adequate control for many people.

Eczema is a very common form of skin problem associated with inflammation. Eczema is mainly caused by an alteration of the skin barrier induced by a genetic or environmental factor, which can make a person more susceptible to allergens and infections induced by bacteria/viruses.

As a result, allergens or irritants can easily penetrate the skin and cause inflammation and itching.

People with eczema are particularly susceptible to bacterial or viral infections. In most cases, staph infections can make the skin yellow, hard, and inflamed. In addition, infection with the herpes simplex virus can sharply increase the intensity of eczema symptoms.

Although there is no cure for eczema, the condition can be managed with medicated moisturizers, topical steroid creams or ointments, topical calcineurin inhibitors, antibiotics and antiseptics, and antihistamine medications . The severity of eczema often decreases with age.

Alopecia areata is a type of skin problem that affects hair follicles and causes hair loss. The condition usually causes small, round-shaped patches of baldness on the head; however, hair in the beard, eyebrows, eyelashes, or other parts of the body can also be affected by the condition.

Although the exact etiology is unknown, alopecia areata is believed to be an autoimmune disease in which the body’s immune system attacks the hair follicles and inhibits hair growth.

Contact dermatitis is a type of skin inflammation that can be caused by direct skin contact with the causative factor. The condition is similar to eczema.

The most common symptoms of contact dermatitis are itching, redness of the skin, and blistering. The skin may also become dry and thickened.

The best way to prevent contact dermatitis is to avoid direct skin contact with causative substances. It is also helpful to wear gloves or improve the skin barrier with good moisturizers. To reduce inflammation, steroid creams can be used. In severe cases, doctors may prescribe oral steroids and antibiotics.

Keratosis pilaris is a very common and harmless skin condition characterized by small whitish or reddish patches or bumps on the skin. About 50 to 70% of adolescents and 40% of adults are affected by the disease.

The condition is usually caused by excessive buildup of keratin on the skin, which in turn blocks skin pores and hair follicles, causing hard bumps to form. In about 50% of cases, the condition is hereditary.

Although there is no permanent cure for keratosis pilaris, symptoms can be reduced by using creams containing vitamin A, urea, lactic acid, salicylic acid, or alpha hydroxy acids. Also, laser therapy, photodynamic therapy, or topical corticosteroids may be helpful.

Lichen planus is a relatively rare skin condition that affects approximately 0.2-1% of the general population worldwide. The condition is characterized by small, itchy, flat rashes on the skin. In some cases, it occurs on the lips and inside the mouth.

Although the exact etiology is unknown, it is thought to be caused by an overactivation of the immune system in the skin. Certain risk factors can increase the risk of lichen planus. These include viral infection, drugs that lower blood pressure or antimalarial drugs, and stress and anxiety.

In most cases, the condition is treated with steroid creams or oral steroid medications. Additionally, narrow band ultraviolet treatment can be used.

2020-03-20
Previous Post: Summer Skin Problems – Advice from a Dermatologist
Next Post: What you need to know about teledermatology