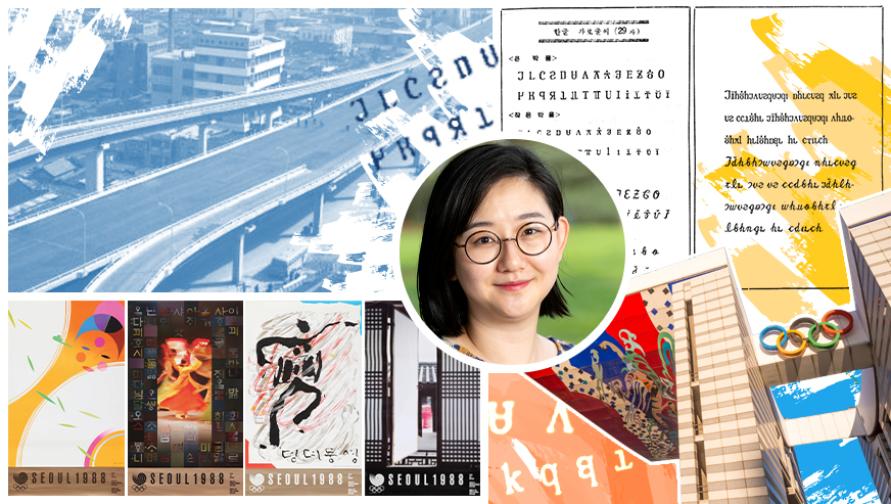 When Seungyeon Gabrielle Jung, an assistant professor in the Department of Art History, wants her students to grasp the impact of design on everyday life, she points to America’s road network. They shouldn’t think too much about it. The mental image of a morning commute creates visceral understanding.

It’s also a visual that helps illustrate what Jung calls “design as a method of problem solving.”

This complexity is what Jung seeks in his research: “I ask myself, what does design do? I’m interested in the doings of design – design as a verb,” she says. She also studies how, in the process of solving a problem, design often becomes problematic. “Design is actually very good at creating problems, and when it enters material existence, the problem remains for a very long time.”

A wide range of things are carefully designed, including product packaging, the kitchen utensils we regularly use, the language systems we write in, even the pop bands we listen to. However, despite design’s ubiquity and enduring, global influence, design history is a rare field of study in the United States.

Even rarer is the fusion of design history with East Asian studies and media studies. Jung – who earned his Ph.D. in Modern Culture and Media from Brown University, and MA and BA in English, as well as BFA in Visual Information Design, from Ewha Womans University in Seoul, South Korea – straddles various subjects to examine design in developmental and post-developmental contexts.

“First world designers were often brought to third world countries, such as India, Turkey and South Korea, to solve economic and social problems. The design was almost used as a propaganda tool,” she explains. “The so-called developed countries, which held the design power, saw the developing world as a collection of problems to be solved by Western technology and design. But if we think about it, design has always existed in all cultures, and there are different ways of designing. Defining practice as simply a method of problem solving limits our understanding of design.

Jung’s book project, Towards a Utopia Without Revolution, examines the political and aesthetic problems that modern design has created in South Korea. One of its chapters dives into the 1988 Olympics, which took place in Korea as it recovered from a series of dictatorships, the Korean War, and Japanese colonial rule.

South Korea was the third country to host the Olympics that were not in Europe or America, making the games an optimal opportunity to present itself as a modern nation on the international stage. But to do so, she had to create a visual identity for herself, a tall order after a tumultuous history of cultural erasure.

The South Korean government forcefully removed many traditional religious symbols – deemed primitive and superstitious – from the country’s landscape in the 1960s and 1970s. When the state was preparing for the Olympics, it could not understand what was only Korean, so he had to resurrect the “relics” he had once destroyed.

“Because they were picked up very quickly and without thinking, they ended up orientalizing Korean culture for global audiences,” says Jung. “They were empty symbols. They were symptomatic of modern Korea which dictators wanted to separate from the pre-modern “backward” nation that Korea once was.

Through her design research, she gets to the root of what it means to build “Koreanness” and what “Koreanness” entails.

Another example she looks at is the Korean writing system. Korean typography evolved from vertical writing that mixed Hangul (the Korean alphabet) and Chinese characters to horizontal writing without Chinese characters. Some linguists have attempted to redesign Hangul so that it emulates the Roman alphabet and better accommodates various printing technologies such as typing.

“But what came out of that experience was a badly mutilated Hangul that lost all its grace and beauty,” she says. Hangul typography has continued to evolve and improve through the work of contemporary designers.

The design of K-pop

As Jung traces, analyzes and critiques Korean legacies, she also delves into emerging trends in Korean media. Interest in Korean culture has grown exponentially over the past decade thanks to the explosive popularity of K-pop and K-drama – two genres that are heavily and meticulously crafted for global consumption.

Up-and-coming K-pop girl group NewJeans is not produced by a music producer or composer, but by a graphic designer, Min Heejin. She has directed the visuals for several K-pop groups and has received critical acclaim for her work on idols such as Shinee, f(x) and Red Velvet. NewJeans are the newest addition to Min’s portfolio, and their success speaks to the importance of design in K-pop and Korean culture.

Many Jung students are familiar with trends in Korean pop culture, making it an accessible subject for discussing the effects of design. “It’s pretty amazing to see. My students already know a lot about Korea and Korean design because they consume a lot of Korean cultural product,” she says.

In one of her design history classes, she gave students the chance to choose what topic they would study for the last week of the class, and they chose plastic surgery — a common endeavor among stars of K-pop and a clear example of design as the problem. -resolution.

They talked about the K-pop idols’ skin lightening and even Ariana Grande’s recent makeup choices. The class discussion included a brief lesson on pre-modern Korea and its preference for lighter skin, as it meant having high social status and not needing to work under the sun.

“Putting all these different pieces of the puzzle together and having a productive conversation is what I look forward to in my classroom,” she says. “That’s the beauty of teaching design. We live in a world where everything is designed, so students come to class with in-depth knowledge on the subject. My job is to provide frameworks that help students think critically about their worldview in addition to course material. One of my students told me that my course made them think critically about everything around them. I took that as the biggest compliment.”

Broaden the definition of design

Design doesn’t always have to solve problems. “It can be beautiful,” says Jung. “He doesn’t even need to have a goal. I’m actually more interested in ugly designs because what we consider good design is itself very problematic.

“Bad design” from developing countries was often seen as such, not because the designers weren’t talented, but because they couldn’t afford to meet the standards of “good design” in Europe. West, says Jung. And sometimes bad design is a necessary step to a truly effective and beautiful design.

“I’m really interested in bad designs that don’t work or behave badly. Good designs are barely noticeable because they work so well, but bad designs hit you in the face. That’s when the design comes into its own, and that fascinates me,” says Jung. “Furthermore, design is not just one thing: it can be beautiful. It can be ugly. It can be good. It can be bad. It can be many things at once. What interests me is to complicate the understanding of design and not just to put certain objects in certain boxes.