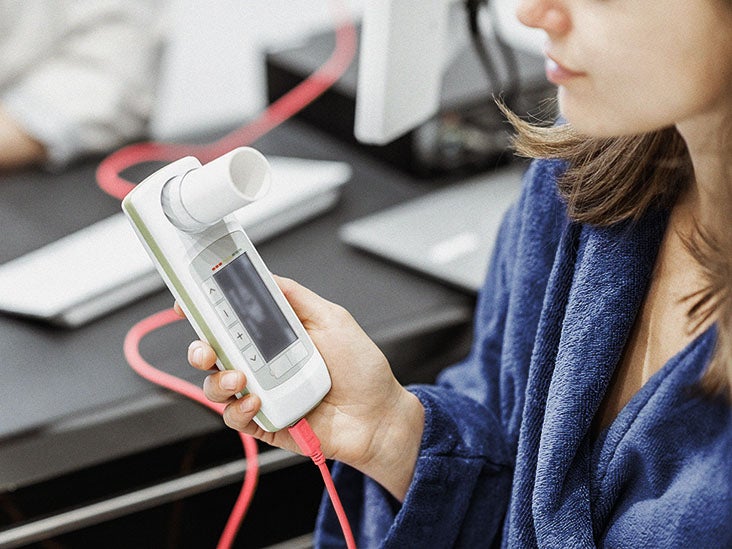 Screening for asthma: what you need to know

Asthma is a chronic lung disease that affects breathing. To diagnose asthma, a doctor can assess symptoms and use a range of breathing tests to measure lung function.

Breathing tests can help a doctor see how well the lungs are working and determine if a person’s symptoms are due to asthma or another condition.

In this article, we look at the different tests a doctor can use to diagnose asthma and what people can expect from the tests.

Asthma is a long-term lung condition that makes it harder for air to move through the airways. There are several types of asthma, including:

Asthma can affect anyone at any age. Most people with asthma are diagnosed at a young age, but older adults can also develop asthma.

Asthma can cause wheezing, chest tightness, or coughing. People may find that certain factors trigger or worsen their symptoms, such as cold air, exercise, or allergens.

An asthma attack can occur if the symptoms are severe. Asthma attacks can also lead to hospitalization and, in respiratory failure and death.

Asthma can cause the airways to swell and narrow. The airways can also become sensitive to environmental triggers, which can cause further inflammation and excess mucus production. This makes it difficult to breathe and causes asthma symptoms.

To diagnose asthma, a doctor may first take a complete history. This may include asking questions about:

A doctor will also ask you about any symptoms that may indicate asthma, such as:

A doctor may want to know how often people experience symptoms, when they occur and what seems to trigger them, and whether symptoms wake people up at night.

A doctor may then perform a physical examination, which may involve:

A doctor may then perform a series of lung function tests to check for asthma. Pulmonary function tests show how well the lungs are working and may include:

During a spirometry test, people will inhale and exhale from a tube that connects to a computer. Spirometry measures the amount and speed of air that people breathe in and out.

If a spirometry test shows reduced lung function, people can take a bronchodilator, which is a medicine that opens the airways.

People will then repeat the spirometry test. If the results show improved lung function, the person probably has asthma.

A doctor may suggest this test to check for other problems, such as emphysema or restriction caused by lung scarring or musculoskeletal problems.

This test measures the anatomical dead space in the lungs, where air is not exchanged. The test is also known as Fowler’s method.

A person inhales pure oxygen and then exhales through a nitrogen analyzer.

A doctor may also suggest this test to check for other lung problems.

A bronchoprovocation test shows how the muscles of the airways react to exposure to certain substances, such as allergens or medications.

A healthcare professional gradually increases the triggering agent until they see a response or exceed the expected threshold.

A PEF test measures how fast people can blow air into a tube using maximal effort.

A doctor will perform stress tests to check how the body reacts to extra effort.

People can use an exercise bike or a treadmill when attached to a heart monitor and blood pressure monitor. As people exercise, these devices measure vital signs.

If people have a history of allergies, or if a doctor suspects an allergy might be causing or worsening symptoms, they may perform a series of allergy tests.

Allergy tests may include blood tests or skin tests. Allergy tests show which allergens cause an immune reaction.

If a doctor suspects that symptoms other than asthma may be causing symptoms, they may perform additional tests to rule out other conditions.

Diagnosing asthma in children under 6 years old . This is because young children may not be able to pass certain lung function tests, such as spirometry.

If a doctor suspects a child has asthma after evaluating the symptoms and medical history, they may prescribe asthma medication to see how the child responds.

Many of the initial tests for asthma can take place in a doctor’s office. According to the American Lung Association, asthma tests cause no pain.

People may feel a slight scratch or needle prick if they have a blood test or an allergy skin test.

A doctor may ask people to repeat the tests several times to ensure an accurate diagnosis.

After the tests, people will be able to resume their normal activities.

Doctors classify asthma as depending on severity of symptoms and lung function.

To diagnose a person’s level of asthma, a doctor may want to know how often people have symptoms and whether coughing or difficulty breathing wake them up at night.

A doctor may also ask if daily activities are causing breathing problems or if people need to use a rescue inhaler.

The four levels of asthma are:

A doctor will consider a person’s age, height, and gender when calculating normal measurements from an asthma test.

If people have abnormal test results, it may indicate a lung problem. In some cases, people with healthy lung function may still have an abnormal result on a breath test.

A doctor will interpret the results and then explain what they mean. Test results could show asthma or another condition that affects the airways.

There is currently no cure for asthma, but a treatment plan can help people manage their symptoms.

A treatment plan may include taking asthma medications, changing lifestyle, and avoiding any triggers as much as possible.

To diagnose asthma, a doctor will assess symptoms, perform a physical exam, and check medical history.

A range of breathing tests can show how well the lungs are working and help a doctor diagnose asthma. Other tests, such as X-rays and allergy tests, can help a doctor rule out other conditions that may be causing symptoms.

If tests indicate asthma, a person can discuss a treatment plan with their doctor.

2022-04-28
Previous Post: Hitachi High-Tech sets a new pace for veneer and coating analysis with the new FT230
Next Post: Inflamed skin: causes, effects and how to prevent it