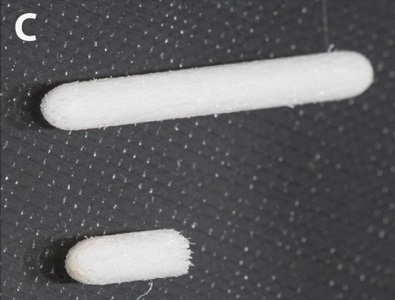 Researchers from MIPT, Skoltech and IMPB RAS have developed a compact sampling probe that facilitates the collection of biological samples for analysis by ambient ionization mass spectrometry. This type of sampler can be used effectively even on board a space station. The findings were published in Acta Astronautique.

Most of us have had a nasopharyngeal swab taken with a cotton swab or, in scientific terms, a sampler. The biological sampling devices used today are very sensitive to storage conditions and require a low temperature or high humidity environment depending on the test, while the samples have a short shelf life of only a few hours, which limits strongly collecting samples from the field both on Earth and in space.

The team decided to examine porous materials in search of a suitable replacement for existing probes and found that the felt used in soft tip pens can be a practical and efficient material for collecting biological fluids from the body. skin, mucous membranes, wounds and lesions. This lightweight material does not require refrigeration or constant storage temperatures, pressure and humidity, while ensuring longer sample storage life.

“For the probe to be as versatile as possible, it must be light, small, easy to handle and ready to be connected to the mass spectrometer in order to immediately pick up signals from the collected molecules,” said Igor Popovhead of the study and head of the MIPT Laboratory of Molecular Medical Diagnosis. “While performing the tests, we realized that a rigid spherical sampler made of porous fibrous polypropylene is best suited for the task, as it easily absorbs various compounds, while retaining its original shape during sampling, transport and storage. This increases both the stability and sensitivity of electrospray ionization, and therefore the accuracy of the test.”

The team’s rod-shaped sampler, made from clean compressed low-density polypropylene fibers, greatly facilitates sample storage: dried biological samples can be stored at room temperature and are unaffected by sudden changes of pressure and temperature. The rigidity and sphericity of the probe allow swabs to be collected without the use of additional tools, while increasing the sensitivity of the test and expanding the range of molecules analyzed, mainly small molecules, such as drugs and metabolites, which are of particular interest for the search for drugs in space. In addition, the polypropylene sampler can be used for mass spectrometry without prior preparation, which makes the analysis of biomaterials much easier.

Mass spectrometry has recently become one of the key tools in biomedical testing. Its continued progress could provide many benefits for biomarker screening, intraoperative monitoring, toxicology, emergency medical care, forensics, food industries and agriculture, where simple sampling techniques without pretreatment extra are vitally important. All this underlines the great relevance of the study.

“Our probe has a wide range of applications ranging from space to hospital emergencies. The main idea behind our project was to find an easy way to collect biological samples by simply dipping the probe in a liquid or passing it through on a surface,” said Stanislav Pekov, an associate professor in the Department of Molecular and Biological Physics at MIPT and a researcher at Skoltech.

Republished with kind permission from Skolkovo Institute of Science and Technology.

2022-04-18
Previous Post: 7 reasons why you should include onion in your beauty routine
Next Post: Skin Tightening Treatment Market Research 2022-2028 with Covid-19 Impact Analysis | Key players