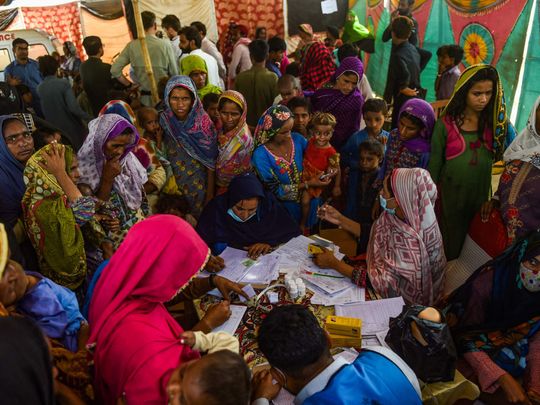 ISLAMABAD: In order to cope with the overwhelming number of child births each day in flooded areas – around 2,000 deliveries per day – WHO has developed a mobile labor ward modality to reach areas where access women in hospitals is difficult.

The World Health Organization (WHO) has targeted 32 priority districts out of a total of 84 affected by recent floods in Sindh, Balochistan, KP and Punjab.

WHO Country Representative Dr Palitha Mahipala at a press conference on Saturday spoke at length about the challenges his teams were facing in providing medical assistance to people affected by the floods and said he s It was a catastrophe whose scale was too enormous and unheard of. far.

Referring to figures from the National Disaster Management Authority of Pakistan (NDMA), Dr Mahipala said around 580,000 people are currently displaced due to the floods and countless families can be seen sitting in camps along the roads waiting for food and medical assistance. The situation is alarming especially in Sindh and Balochistan, he said.

Malnutrition, stunting in children to be treated

WHO is working in close coordination with government and donor agencies as well as stakeholders on several fronts, the country representative said.

To address the challenges of malnutrition, 100 new nutritional stabilization centers will start operating over the next two weeks.

WHO has already released 10 million dollars (36.73 million dirhams) to support the health response to the floods to treat the injured, provide medical supplies to health facilities and prevent the spread of infectious diseases and diseases. epidemics.

In addition, $618,048 was funded to provide essential drugs, emergency stocks, medical supplies, water purification kits, tanks, tents, ORS sachets and tents, a- he said, adding that between provinces, support has been distributed in response to the flood emergency.

Total drug, equipment and other logistical support amounts to $2 million, he said, adding that drugs and diagnostics under development amount to more than $5 million. The mobile clinics – vehicles to be donated amount to approximately $500,000.

Water and sanitation equipment partially distributed and some are in Karachi warehouse worth $174,000 while diagnostics worth $7.83 million are being procured .

The WHO has prepared dashboards, including a logistics dashboard, to provide an overview of its operations and the current situation in flood-affected areas, he said.

In the flooded areas, 330 teams recruited and trained by the WHO are already working for health and medical assistance. WHO also provided 4 million water purification tablets.

The WHO has also started construction of half of the 400 fully damaged primary health care centers and 30 of them have already been completed, he said.