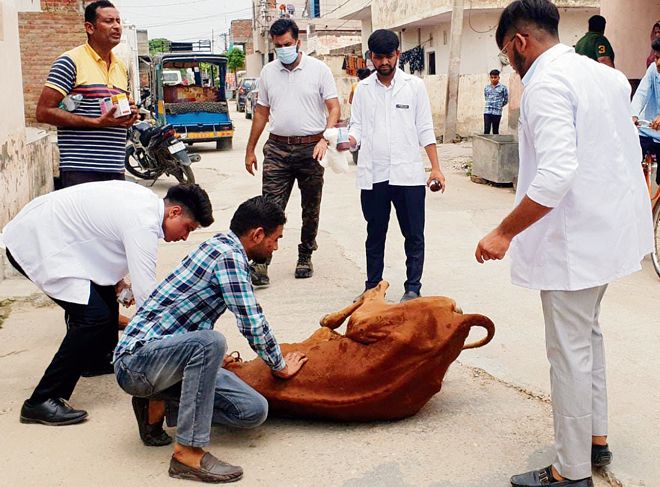 The district administration has made sweeping statements about elaborate arrangements to properly dispose of animal carcasses. According to authorities, dedicated teams have been deployed to bury animal carcasses daily. But the reality is that carcasses are dumped in open areas. More than two dozen carcasses were dumped in an open area near the Badal Road upper bridge.

Notably, The Tribune had highlighted the disposal of animal carcasses in the Sirhind Canal. Later, the administration had these carcasses removed from the canal.

Our teams work tirelessly to ensure dead animals are lifted and buried. There could be isolated cases where animals have been thrown out into the open. —Showkat Ahmad Parray, DC

Meanwhile, the DC has already asked people not to throw animal carcasses out in the open and to bury them properly, but the instructions seem to have fallen on deaf ears.

Municipalities and city councils have made every effort to control the threat. There are dedicated teams, which use JCB machines to lift animal carcasses and bury them in designated places. The administration must also ensure adequate supervision to put an end to this practice.

Sources said the cow owners acted irresponsibly. After observing that the animal with LSD cannot produce milk, they pay Rs 500 to Rs 1,000 to the community guards (rakhas) to take their animal and leave it in a secluded place beyond the boundaries of the respective village .

It was a gross violation of the Epidemic Diseases and Animal Cruelty Act, the sources said. Therefore, the administration must identify the owners of these animals and take strict punitive measures against them, the sources added.

It is surprising that farmers’ unions have been largely inactive when it comes to raising the problems encountered on the ground in containing LSD.

DC Showkat Ahmad Parray said: “We are facing resistance from people in some areas regarding the burial of dead animals. This problem was solved by moving the burial area.