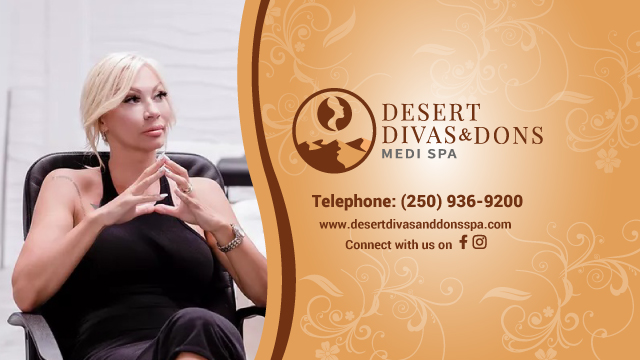 With much of their clientele coming from out of town, The Desert Divas and Dons Medi Spa decided to open free accommodation for customers. This added feature will ensure that all traveling guests will have a place to spend the night.

Desert Divas and Dons Medi Spa is a skin clinic located along Granite Avenue. The company is best known for its proprietary, world-class skin care technology that attracts customers from across the province and the country.

“Much of the clientele is from Osoyoos, Kelowna, some from Alberta and some from Vancouver Island,” described Anastaszia Cashfounder of Desert Divas and Dons Medi Spa.

“People travel here to come and get these treatments, so we wanted to create accommodations for them to show our appreciation.”

Cash is currently building a one-bedroom unit that will serve as a free service for his out-of-town guests. The unit, located in Lower Nicola, will be available to customers starting November 1.

“We are a very specialized boutique clinic,” she said. “Half of my house is where I live, the other half of the house is the medical clinic.”

Cash explains that she had set up her operations in this way in order to protect the privacy of her customers.

“People don’t want to be seen coming into a brick-and-mortar storefront,” she explained. “Now that we’ve moved, we’ve been a lot busier. We are currently taking appointments for mid-January.

Cash moved to Merritt two years ago because it’s close to her family and she saw an opening for her niche.

“We have children and grandchildren about an hour and a half east and west of Merritt,” she explained. “I believe the climate here is one of the most desirable in the country.”

Prior to moving to Merritt, Cash previously owned and ran Dermal Aesthetics Skin Lab, a similar service located in Vancouver.

“I’ve been in the skincare industry since the 90s,” Cash explained. “I was a survivor of domestic violence and had scars on my face. I ended up going to a plastic surgeon to help me with the scars. I remember how the surgeon treated me. helped and made me feel what inspired me to give back by doing the same.

The clinic features state-of-the-art skincare technology provided to Desert Divas by DermaSpark, a Vancouver-based company that has given the clinic exclusive rights to its proprietary machines in the region.

“I’ve been working with the company that supplies the machines we use for quite some time now and they don’t allow anyone in the area to compete with me,” Cash explained. “It’s their way of protecting their merchants. They are very loyal. »

Desert Divas and Dons are the first and only in the world to have 3D Pulse Light Therapy (IPL) from Israel. It is the world leader in technology for IPL treatments. The clinic also has the Divine Pyramid Facelift, the only RF microneedling device that has the ability to do a true facelift without any downtime or anesthesia.

“I wanted to have the most advanced technology in the world,” Cash said. “The results are incredible. Although there are other RF devices on the market, none have the ability to target multiple layers of skin, perform RF microneedling at multiple depths, perform dynamic muscle activation (DMA) as well as a split resurfacing.

Cash believes this innovation along with very competitive pricing has been the reason his business has been highly sought after by people outside of the Nicola Valley. On top of that, Desert Divas and Dons also introduced Dr. Kayla Ruschkowski to their team on October 19.

“She emailed me and we ended up having a talk,” Cash recalled. “Dr. Ruschowski thought my company was what she was doing. She’s all about women’s health, she loves working with women and helping women.

The Desert Divas and Dons Medi Spa is located at 1751 Granite Avenue. To learn more about their services, visit www.desertdivasanddonsspa.com.