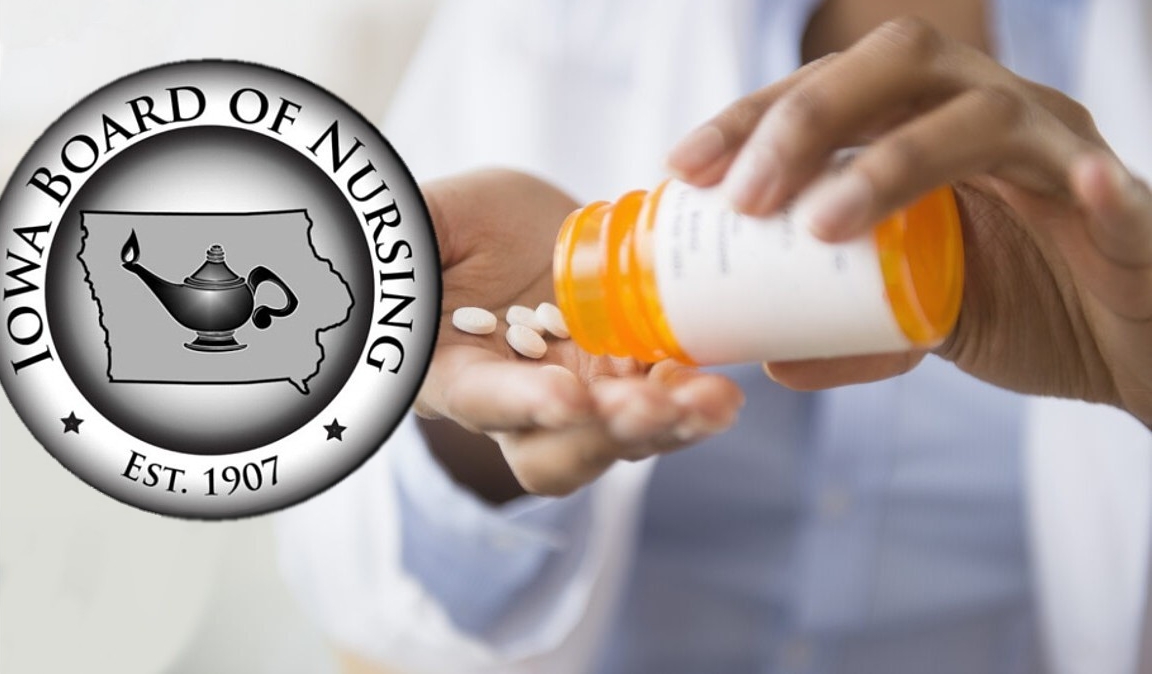 The Iowa Board of Nursing recently disciplined several Iowa nurses for offenses such as stealing painkillers from patients, medication errors, and falsifying patient records.

One such case involves Joanna May of Oskaloosa, who was the subject of a complaint filed with the board in October 2020. The complaint alleged that May misappropriated hydrocodone while on duty in as a nurse in an unspecified nursing facility.

According to the council, May had just started a night shift at the facility when she and another nurse who was preparing to leave for the night finished counting all the narcotics. At that time, a blister pack containing 19 hydrocodone tablets for one patient was in the facility’s inventory and was counted. May was the only nurse working at the facility overnight, and the next morning a nurse’s aide started her shift and discovered the hydrocodone card was missing. Later that day, another nurse found the card, now empty, in the facility’s shredding bin.

Police were called and, according to counsel, May was charged with possession of prescription drugs without a prescription and abusing addicted adults. She pleaded guilty to the drug charge and the abuse charge was dismissed by prosecutors. She was sentenced to one year probation and fined $430, according to the board.

The Iowa court system has no record of the charges against May, which may be the result of a deferred judgment that resulted in the case being removed from court records.

In April 2022, the Board of Nursing charged May with being found guilty of an offense directly related to the duties and responsibilities of the profession. She later failed to appear for a hearing on the matter.

The board recently voted to suspend May’s license, which can be reinstated after 12 months of sobriety, completing a full substance abuse and mental health evaluation and complying with all treatment recommendations resulting from the evaluation. . At that time, her nursing license would be put on probation for 12 months.

Other Iowa nurses whose licenses have been sanctioned recently include:

—Kristina Cimaglia of Monroe, who is a former employee of Polk County Health Services. Cimaglia was accused by the board of sharing “inappropriate content with a colleague” in December last year while working for an unspecified public health facility. The council’s statement of charges gives no indication of the content, how it was shared or whether it was related to the patient. In accordance with a transactional agreement with the board of directors, Cimaglia must complete 30 hours of ethics training.

Cimaglia was the health services coordinator for Polk County before her employment with the county ended in March of this year. The deputy director of Polk County Health Services said Thursday the agency had no comment on the matter, but added that Cimaglia was not fired and did not resign instead of to be fired.

—Jaimee Ulrich of Armstrong, who was charged by counsel with committing an act that may harm a patient’s well-being and knowingly permitting the use of falsified information in patient records. The council alleged that while working at an unspecified hospital in September 2021, Ulrich administered the wrong medication to a patient when she irrigated the patient’s catheter using the wrong solution, then falsely claimed to have administered a different drug. Pursuant to a settlement agreement with the board, she agreed to complete 38 hours of continuing education on medication errors.

Ulrich said Thursday that the written settlement agreement was incorrect and that she only had to complete 33 hours of continuing education. She said there were no adverse outcomes for the patient as a result of her error, which she said occurred at Avera Holy Family Hospital in Estherville. She said the hospital “had it for me” after refusing to receive the COVID-19 vaccine, relying on medical and religious exemptions.

—Tina Bacorn of Durant, who has been charged by the council with misappropriation of drugs or medical supplies; falsifying patient records; and possession or unauthorized use of controlled substances. The council alleged that, while working at an unspecified hospital in 2021 and 2022, Bacorn stole controlled substances on “numerous occasions”.

In December 2021, according to the board, she walked into a hospital where she was not working and “removed narcotic medication from a patient in intensive care” and then replaced that medication with saline solution. His license was suspended indefinitely pending completion of drug treatment and 12 months of sobriety, after which his license will be reinstated and subject to two years of probation.

According to state records, Bacorn had worked as a nurse for the University of Iowa Hospitals and Clinics since 2019.

— Michelle Hanson of Keokuk, who was accused by the board of tampering with records. The board alleged that while working at an unspecified health care facility and serving as director of nursing, administrator and bedside nurse, she submitted falsified records to her employer indicating that she had received the required annual flu vaccine. Pursuant to a settlement agreement reached with the board, Hanson must complete 30 hours of professional ethics training.

State records show that until last December, Hanson had been a state-licensed nursing home administrator for eight years, with no record of any disciplinary action taken by the state’s Board of Nursing Home Administrators. ‘Iowa.

In what appear to be related cases, two other Iowa nurses – Cathi Coley of Packwood and Julie Helling of Mount Pleasant – have each been accused by the board of falsely reporting they administered the vaccine flu to a supervisor where they worked. The council issued a warning to Coley and Helling.

—Sherry Frisch of New Hampton, who was charged by the board with failing to assess a patient, committing an act likely to harm a patient’s well-being and falsifying records. The council alleged that, while working at an unspecified long-term care facility, Frisch twice failed to provide a resident with necessary skin treatment, then falsely documented that she had do. His actions allegedly resulted in the resident contracting a bacterial skin infection. Under a settlement agreement with the commission, she must complete 18 hours of patient advocacy and ethics training.

— Emily Crouch of Sioux City, who was charged by counsel with committing an act likely to harm the welfare of a patient. The council alleged that, while working at an unspecified medical clinic in March 2020, she ‘sent’ the wrong dose of medication for a patient and then directed the medication to the wrong patient under the wrong provider’s name of care. In August 2021, the council alleged that she ‘sent’ two incorrect medications for a patient and then failed to forward a patient’s newly ordered medication to a pharmacy. In March 2022, she allegedly ordered the incorrect test for a patient. Under a settlement agreement with the board, Crouch must complete 15 hours of medication error training.