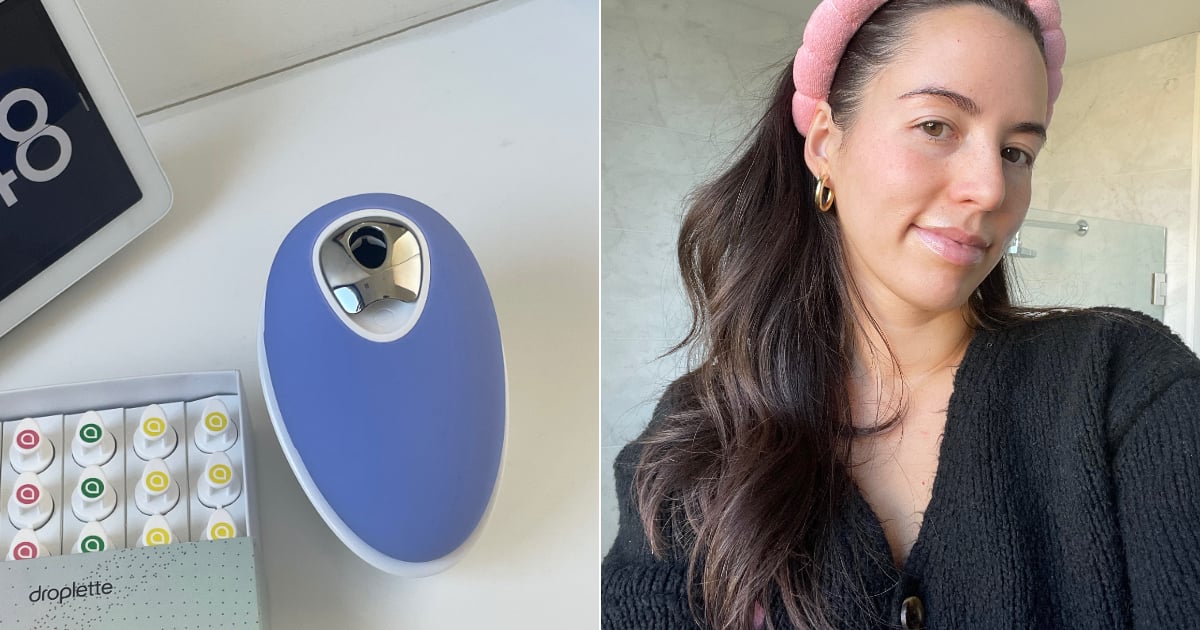 If you are someone who loves topical actives when it comes to skin care, I have bad news for you. Many of those expensive products that you slather on your skin day after day probably don’t penetrate your skin’s surface. Our skin barrier is designed to deliberately keep things out and therefore only small molecules are actually absorbed.

Madhavi Gavini and Rathi Srinivas, two MIT-trained scientists, set out to change that with Droplette ($299), a new skincare device set to change the way we apply our skincare. Think of your skin barrier as the hostess of Nobu Malibu: it doesn’t let anyone in unless they’re really, really important. Then think of Droplette as your personal concierge: it gets you in, at a table with a view of the ocean, without any waiting time.

Here’s everything you need to know about the hot new tool.

What is the droplet?

Droplette is a NASA-backed physics-based device that breaks down actives into a micro-mist, which is delivered into the skin via a high-velocity aerosol. The actives are stored in capsules each containing the daily dose of a formulation developed by dermatologists.

How does Droplette work?

I knew that this product being described as a “physics-powered” device most likely meant that whatever actually made it work was going to be way over my head. I’m not the most scientific person, and I came very close to failing physics in high school. To help me understand how TF Droplette actually works, I reached out to the brand’s CEO, Madhavi Gavini, and asked him to explain the process in the simplest way possible.

The first thing Gavini explained was that things are normally absorbed into the skin through a process called diffusion. Diffusion is a natural process that happens over time, but it can take hours or even longer for things to be absorbed into your skin.

“When you think about actives – even something small enough to get in like vitamin C – if we’re talking hours, let’s be honest: most will oxidize, they’ll be destroyed by UV, or just in the au course of your day, you will sweat or wipe yourself [before it can be fully absorbed]”, she says. “For things that are bigger, like collagen or hyaluronic acid, it’s not going to penetrate your skin because it’s just too big. It’s like trying to get a very big thing out of a very small hole. It just won’t happen.”

As Gavini was saying that, I imagined all the times I tried to thread a needle and I imagined if I needed to thread my needle with, say, a shoelace. Basically not possible. So how does Droplette make the impossible possible?

“What Droplette does differently is that we don’t use broadcast. It’s more of a mechanical thing where we force it through. We encapsulate [actives] into tiny droplets, we create an aerosol of it, and then we take that aerosol and we accelerate it. Once the aerosol is moving at high speed,” says Gavini, “it increases evaporation, so the droplets become denser and smaller. It moves at high speed, so it doesn’t just spread slowly; it’s on its way.”

Eager to test the device for myself, I used Droplette for a few months over the past year.

How to use Droplet

The first thing I did after receiving my Droplette device was to make sure it was fully charged. I then connected it to the Droplette app which I downloaded to my phone. When it came time to try it (and after watching a few instructional videos first) I started with clean, dry skin, chose a capsule – opted for collagen – and I inserted it into the chamber of the device.

I held the white side of the device about half an inch from my face, pressed the “on” button, and began to move the device in a circular motion, concentrating on only one side of my face. The device works in three 15-second intervals, so I repeated this process on each side of my face, then on my forehead. As for how I felt when it was happening, the answer is . . . nothing. OK, yes, I felt a very light mist on my face, but it really wasn’t much.

As someone who needs instant gratification (I blame Amazon Prime shipping), I wasn’t sure how I felt about the lack of feeling, but Gavini says this feature is intentional. “We first built this to treat pediatric patients with wounds. So you don’t want something that’s going to cause a lot of pressure.”

Despite the fact that I couldn’t feel anything on my face and the mist left no residue, I could definitely see the results. My face definitely looked plumper and brighter immediately after my first use, and I continued to see similar results each time I used the collagen capsules.

As for the other Droplette offerings, since I already use prescription topical retinol, I opted out of this capsule, but tried the glycolic acid capsules. When I first looked at the Droplette usage information device, they noted that for glycolic capsules, users should hold the device even closer to their face and they should also hold their breath while the device is running.

I followed their instructions to the letter, but still found myself coughing every time I used the glycolic capsules, which immediately made me suspicious. When I asked Gavini about it, she said they have since updated their advice on how to use glycolic capsules. “What we tell people to do is just a spot treatment. Hold it against the [affected] mains, turn it on, then turn it off. If you do that, very little gets out of it. For people who have cystic acne, it’s extremely effective.”

I don’t have cystic acne, but I do get acne breakouts sometimes. I’ve been using Gavini’s suggested method for a few weeks, and it’s been a complete game-changer. I’m no longer coughing (phew!), and instead healing my acne breakouts much faster than usual.

The verdict on Droplette

Although the process took some getting used to, I look forward to my skincare sessions with my Droplette, who I’ve affectionately named Penelope. (I went with a “P” name because she’s purple.)

As for the price, at $299 for just the device, it’s one of the most expensive tools I’ve tried. However, for someone like me who has never tried an injectable (and frankly is too scared to do so), the whole concept is groundbreaking and well worth the cost. Although I’ve been in a committed relationship with my prescription retinol for nearly two years, the Droplette device actually makes me consider giving it up just so I can receive my retinol via the micro mist I’ve come to know and to love.