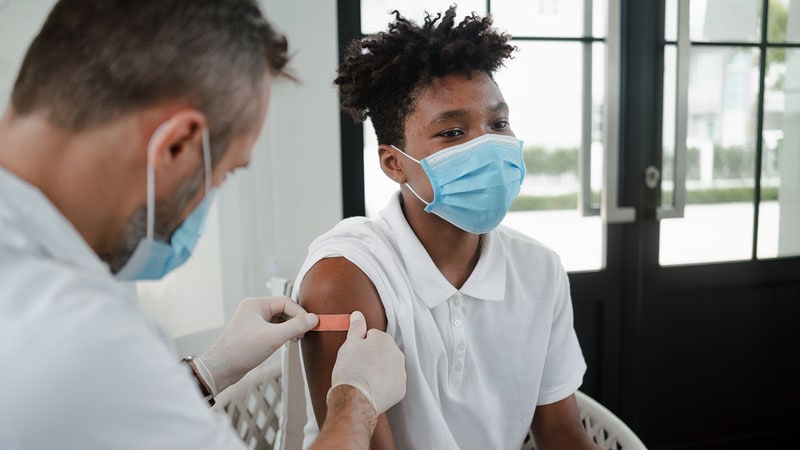 BOSTON – Requests for medical waivers to avoid a second dose of COVID-19 vaccine or a booster after first-dose skin reactions are not justified on the basis of risk, according to an analysis of several large datasets presented during the annual meeting of the American Academy of Dermatology.

According to the data, “there are no serious adverse consequences of these skin reactions,” said Esther E. Freeman, MD, PhD, director of Global Health Dermatology, Massachusetts General Hospital, Boston.

This is important because the risk of vaccine hesitancy increases dramatically in patients who experience reactions to the first dose of vaccine, according to tracking of more than 50,000 vaccinated employees in the Mass General Brigham Healthcare System (MGBHS). According to Freeman, there was almost a fourfold increase in the second-dose refusal rate for those who had skin reactions and more than a fourfold increase for those who developed angioedema.

Before the data became available, skin reactions were a cause for concern among dermatologists and others involved in monitoring vaccine-related adverse events. Injection site reactions (ISR) are associated with virtually all injectable vaccines, so they were expected, but a small proportion of patients developed large red patches in the injection arm 7-8 days after inoculation .

“These late reactions caused a lot of initial panic,” said Freeman, who counted herself among those alarmed by what the reactions might mean. “Was it cellulite? Would the next dose cause anaphylaxis? We were worried.

This concern dissipated with the availability of more data. In a global registry that has so far recorded more than 1,000 skin reactions in 52 participating countries, it appears that approximately 2% of patients have a skin reaction other than an RSI after the first dose. All disappear with minimal skin care or no treatment.

After the second dose, the proportion is lower. If there is a reaction, it usually happens sooner and resolves faster.

This data is “incredibly reassuring” on several levels, she explained. Additionally, it allows clinicians to confidently explain to patients that there are no serious sequelae of rashes, immediate or delayed, from available COVID-19 vaccines.

“Every skin reaction I’ve seen is something we can treat,” she added, noting that most reactions go away with little or no supportive care. Following skin reactions, in particular late lesions, it is not uncommon for patients to refuse a second injection. Some ask for a medical waiver to avoid further exposure to the vaccine. According to Freeman, this is unwarranted.

“I didn’t exactly grant any waivers,” she said. She explains to patients that these reactions were not predictive of serious events, such as anaphylaxis. Although the trigger for the hypersensitivity reaction remains unknown, there is no evidence of serious consequences.

Delayed skin reactions are more often associated with the Moderna vaccine than with the Pfizer vaccine. A notable difference between these vaccines is the higher mRNA content in the Moderna formulation, but Freeman said this is only a potential hypothesis for a higher frequency of reactions to this version of the vaccine.

Patients with a history of allergic disease are more likely to develop a reaction, but not significantly more likely to have a more difficult to manage reaction, according to Kimberly G. Blumenthal, MD, co-director of the clinical epidemiology program at Mass General.

Anaphylaxis has been associated with COVD-19 vaccines as it has been with virtually all injectable vaccines, Blumenthal said during the same session. But, she added, the risk is very low, and it remains low even in people with a history of serious hypersensitivity reactions in the past.

Of those who responded to the first dose, all but 2.4% took a subsequent dose. Again, serious reactions were extremely rare. These serious reactions included anaphylaxis and hospitalization in 3% of patients, but there were no deaths and all resolved.

The absence of serious sequelae from a reaction to a COVID-19 vaccine should be considered in the context of the benefit, which includes protection against death and hospitalization from the virus, according to Blumenthal. Citing evidence that reactions to the first vaccine are a source of vaccine hesitancy, she agreed that it is important to educate patients about the relative risks.

“Even in our own cohort of MGBHS employees, we have people, including those who have been pro-vaccines in the past, who become hesitant,” commented Blumenthal, who said there is data from the Kaiser system. Permanently showing similar vaccine reluctance after a first-shot reaction.

After more than 500 million doses of the Moderna and Pfizer vaccines have been administered worldwide, no deaths from anaphylaxis have been reported. Although Blumenthal said one such unconfirmed death was recently reported, she pointed out that this single death, if valid, is dwarfed by the lives saved through vaccination.

Asked about her strategy for counseling vaccine-hesitant patients, Freeman said the safety data set is extensive and compelling. There is overwhelming evidence of a favorable benefit/risk ratio overall and among first responders.

“I can reassure them based on the data,” Freeman said in an interview. “Less than half will have a reaction to the second hit and even if they do have a reaction, it’s likely to be less severe.”

Although the main message is that vaccination can save lives and far outweighs any risks, Freeman specifically conveys this message to those hesitant to take a second shot after a first reaction: “I can help you to cross”.

Freeman disclosed that he has received research grants/funding from the International League of Dermatological Societies and the National Institutes of Health. Blumenthal did not disclose any relevant financial relationships.