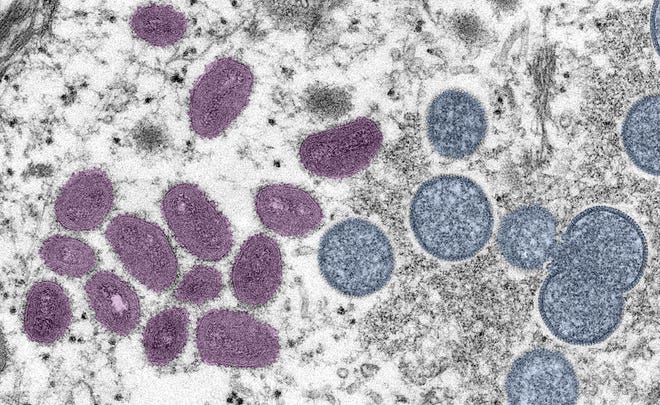 Austin Public Health is investigating a possible case of monkeypox

Austin Public Health is investigating a suspected case of monkeypox in Travis County. The agency said it was awaiting confirmation of test results from the US Centers for Disease Control and Prevention, but the person had a presumptive positive result when tested.

Monkeypox is a rare infection caused by a virus and has a noticeable rash as its main symptom.

The person who may have contracted monkeypox did not require hospitalization and is self-isolating at home, according to Austin Public Health. The agency is contact tracing and contacting people who have been in close contact with this person.

This person had been in close contact with someone who had traveled from out of state and was being tested for the disease.

“While the threat of monkeypox remains low, we recommend that all Travis County residents be aware and seek medical attention if you think you have symptoms of the virus,” said Dr. Desmar Walkes, County Health Authority of Austin-Travis. health care providers are working with epidemiologists to monitor the virus, the community should continue with the hygiene practices we know, such as hand washing and minimizing skin-to-skin contact, especially with those with rashes or sores.

The CDC has found at least 201 cases of monkeypox in the United States, including at least seven in Texas. Dallas County has had three cases. They were people who had recently traveled from Spain and Mexico. The CDC has not yet recorded any deaths from monkeypox.

Symptoms of monkeypox include:

How is monkeypox spread?

According to the World Health Organization, the monkeypox virus usually spreads to humans from infected humans or animals. The virus can be passed from person to person through close contact, such as skin-to-skin contact or by touching infected bedding or clothing.

Monkeypox is much more difficult to spread than COVID-19, as it requires direct contact, rather than being spread through the air.

It is passed from person to person in these ways:

People with monkeypox should avoid close contact with others until a week after the scabs resolve as a precaution, said Rodney E. Rohde, professor of clinical laboratory sciences at Texas State University. which studies infectious diseases such as monkeypox, influenza and COVID-19.

If you must care for someone with monkeypox, use personal protective equipment such as gloves and masks and use good hand washing.

Will monkeypox cause a pandemic?

Monkeypox is unlikely to cause another pandemic, Rohde said, but after their experiences with COVID-19, people might fear another major outbreak.

“We are very hypersensitive after COVID,” Rohde said. “I actually appreciate people appreciating what’s going on around them.”

The comparison to smallpox might also scare some people off, Rohde said, but the absence of deaths is one of the main differences between monkeypox and diseases such as smallpox or COVID-19.

Most monkeypox symptoms go away on their own within a few weeks. According to the World Health Organization, infected newborns, young children, and people with underlying immune deficiencies could be at risk for more severe symptoms and even death from monkeypox.

After:Monkeypox “not concerned” by WHO will become a global pandemic; few US cases reported

Another distinguishing point between monkeypox and COVID-19 is the reproduction rate, which shows how many people an infected person is likely to infect. For the highly contagious original variant of the coronavirus, the rate in the United States was estimated to be between 1.5 and 6.68, which means one infected person is likely to infect up to six people. The omicron variant had an estimated reproduction rate of 5.5 to 24, or between five and 24 people infected by a single person.

Rohde said the reproduction rate of monkeypox is less than one in America, which means an infected person is likely to infect a person or anyone at all.

Monkeypox is not a new virus, and this is not the first time monkeypox has been present in the United States. The first confirmed human case of monkeypox dates back to 1970 in Congo in central Africa. The last outbreak in the United States was in 2003 and included 47 confirmed and probable cases from a shipment of infected animals from Ghana to West Africa.

Is there protection against monkey pox?

Monkeypox is a distant cousin of smallpox, so the smallpox vaccine may offer some protection against monkeypox. During the 2003 outbreak, the CDC rolled out the smallpox vaccine, increased lab testing, tracked potentially infected animals, and investigated possible human cases.

The Strategic National Stockpile has enough smallpox vaccine to potentially vaccinate every person in the United States. This is different from the early days of the COVID-19 pandemic. COVID-19 was a new virus, which meant a vaccine had to be developed. The first known vaccination against COVID-19 in the United States took place in December 2020, about a year after the discovery of COVID-19 in China.

“We certainly have the capacity at the public health and health care level to manage” these cases of monkeypox, Rohde said. unusual.”

Is there a test for monkeypox?

The United States has 74 Response Network labs that can perform PCR testing for monkeypox, which Rohde says is sufficient for the current infection rate. Still, as infectious disease experts monitor the virus, Rohde said it was important to ensure there were enough testing sites.

“This one certainly brings up another reminder of what I talk about all the time, which is the critical need for public health surveillance and diagnosis and things like that going on,” Rohde said. “We can’t hold back, wishing things would move forward, so this is a good reminder, because COVID has kind of been at least a little quieter, to wake people up that this needs to be an ongoing process and finance. , eternal need of the country.