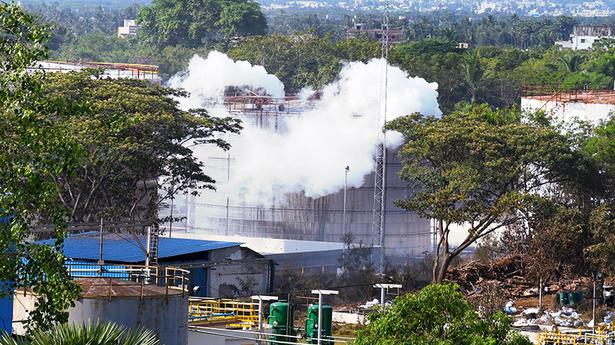 Survivors of the styrene monomer leak at LG Polymers premises in the city are still living in fear, and many have yet to recover from the trauma, even two years after the incident.

On May 7, 2020, styrene monomer turned into vapor due to intense heat and escaped from a storage tank vent in the plant located at RR Venkatapuram in the city.

The gas leaked around 3 a.m. as people slept soundly and spread throughout the city, mainly affecting five villages near the company – RR Venkatapuram, Padmapuram, BC Colony, Gopalapatnam and Kamparapalem.

The incident claimed the lives of 12 people. While 1,000 people had to be hospitalized, 2,000 others were affected.

According to a survey conducted by the Alluri Sitharamaraju Vignana Kendram Research and Research Center (ASVKRC), more than 30% of the residents of the five villages still suffer from anxiety and psychological problems.

What worries environmentalists and medical experts is that the health monitoring system has taken a back seat.

“Styrene is possibly carcinogenic, and if inhaled in large amounts or exposed for longer, it can cause a number of health problems related to neurological, psychological, skin, eye or lung disorders,” says D. Raghunadha Rao, Chief Medical Oncologist at KIMS-ICON Hospital.

Recently, Dr. Raghunadha Rao and a team of experts, including V. Ramana Dhara from Indian Institute of Public Health, Hyderabad; GR Sridhar of the Endocrine and Diabetes Center; and Thomas H. Gassert of the Department of Environmental Health, Harvard TH Chan School of Public Health, Boston, MA, USA; had published a detailed article in Dr. NTR’s Journal of Health Sciences University, highlighting the health issues related to the incident and how to mitigate these disasters.


They pointed out that the authorities concerned had not collected the reference data for the future follow-up of the case.

“It is important to study immediate toxicity, intermediate toxicity and long-term toxicity. But we don’t have the basic data to study, and it will be difficult to study the children who will be born to those affected,” explains Dr Raghunadha Rao.

K. Padma of Alluri Sitharamaraju Vignana Kendram and Research Center points out that approximately 50% of those affected still suffer from headaches, 27% from dizziness, 39% from eye problems; and about 30% have skin problems.

Founder of ASVKRC and member of the CPI(M) State Secretariat, Ch. Narasinga Rao says the promised super-specialty hospital is still on paper. A full-fledged clinic has also not been set up.

Jagdish Patel of People Training and Research Centre, Vadodara, alleges that Union and State governments have given the least attention to the subject of occupational health. It is time for the Union government to ratify ILO Convention 155, he said.

“At least six committees have concluded that the accident occurred due to management’s negligence, and yet there is no action against it.”Ch. Narasinga RaoHead of CPI(M)

At least six panels, including one commissioned by the National Green Tribunal (NGT) and the state government’s High Power Committee, had concluded that the crash had occurred due to “gross negligence by management”.

“Committees spoke of faulty tank design, lack of basic safety measures and lack of knowledge of staff to operate the plant. But no action was taken against the management”, alleges Mr. Narasinga Rao.