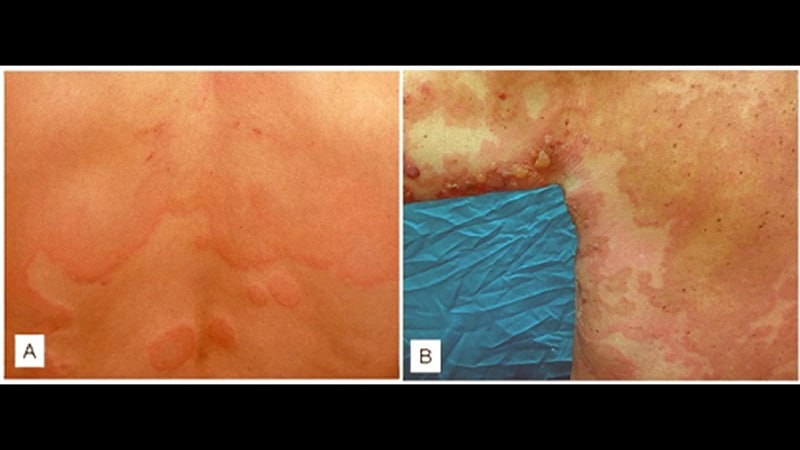 Bullous pemphigoid, an immune-mediated condition characterized by large, fluid-filled blisters on the skin, is a rare but serious complication of cancer treatment with immune checkpoint inhibitors (ICI) that can lead to the interruption or discontinuation of treatment.

Boston researchers report that among patients receiving ICI, being 70 or older and having skin cancer are both significant risk factors for bullous pemphigoid. On the positive side, ICI-induced bullous pemphigoid also appears to be a marker for improved tumor responses to treatment.

In a nested case-control study of 5636 cancer patients who received either a programmed death 1 inhibitor such as pembrolizumab (Keytruda) or nivolumab (Opdivo) or a cytotoxic T cell-associated protein 4 inhibitor such than ipilimumab (Yervoy), 35 patients (0.6%) developed bullous pemphigoid. The study by Nicole R. LeBoeuf, MD, MPH, of Brigham and Women’s Hospital in Boston, and colleagues was published online April 20 in JAMA Dermatology.

“What’s interesting is that 0.6 is a small number, but we’re seeing bullous pemphigoid at a considerably higher frequency than you’d expect in the general population,” LeBoeuf said in an interview. with Medscape Medical News.

And although bullous pemphigoid has the potential to disrupt ICI therapy, it also appears to be a marker of a favorable tumor response, the researchers found.

Their findings suggest that management of bullous pemphigoid for patients receiving ICI should focus on early identification and management with therapies directed at the specific toxicity, LeBoeuf said.

“When you make a specific diagnosis like bullous pemphigoid, then you can treat that specific disease with very targeted therapies, like omalizumab, dupilumab or rituximab – things that are not overall immunosuppressive like steroids or d ‘other T cell depleting agents. Studies have shown that B cell depletion with anti-CD20 agents is not detrimental to immune checkpoint inhibitor therapy,’ she said.

As previously reported by Medscape Medical Newsapproximately 40% of cancer patients treated with ICI experience dermatological adverse events related to the immune system which can range from mild skin rashes and hair and nail changes to rare but life-threatening complications, such as Stevens-Johnson, a form of toxic epidermal necrolysis, according to members of a working group from the European Academy of Dermatology and Venereology.

“The desirable immune-mediated oncological response is often achieved at the cost of immune system-related adverse events (IREs) that can potentially affect any organ system,” they wrote in a position statement on event management. dermatological adverse reactions derived from ICI.

They assessed the records of all patients at the three Harvard-affiliated hospitals to identify patients with ICI-associated bullous pemphigoid from October 2014 to December 2020. Control individuals were all patients from the Dana-Farber Cancer Registry who received ICI during the study period.

The researchers selected age at onset of ICI (69 and younger or 70 and older), gender, ICI agents, and type of cancer as potential risk factors.

They used propensity score matching based on age, cancer type, ICI agent, and number of ICI cycles to match two control individuals to each patient.

Comparing the 35 case patients with their matched control patients, a complete or partial response to the first restaging imaging was significantly associated with the development of bullous pemphigoid (OR, 3.37, P = .01). Additionally, there was a higher likelihood of tumor responses to ICI in patients with bullous pemphigoid compared to matched control patients (objective response rate, 82.9% versus 61.4%, P = .03).

Ryan Sullivan, MD, who treats skin cancer patients at Massachusetts General Hospital Cancer Center but was not involved in the study, said the findings raise questions about the relationship between skin cancers skin and adverse events related to the immune system.

“It is compelling that bullous pemphigoid is a skin toxicity and is more common in patients with skin cancer,” he noted. “It’s a very interesting finding, and the reason it’s interesting is that it’s harder to understand why a presumably antibody-mediated side effect would be more likely to have this cross-reactivity where the tumor started and where the toxicity occurred,” he said. in an interview with Medscape Medical News.

He noted that the benefits of ICI for patients with skin cancers far outweigh the risks of dermatological adverse events such as bullous pemphigoid and that events associated with ICI require judicious management.

No source of funding for the study has been reported. LeBoeuf said he received grants from the National Institutes of Health National Cancer Institute while conducting the study and personal fees for serving as a consultant for several companies outside of the study. Co-author Arash Mostaghimi, MD, MPA, MPH, is associate editor of JAMA Dermatology but was not involved in selecting or evaluating studies for publication. Sullivan leaked advice for ICI makers Bristol-Myers Squibb and Merck.

Neil Osterweil, award-winning medical journalist, is a longtime and frequent contributor to Medscape.