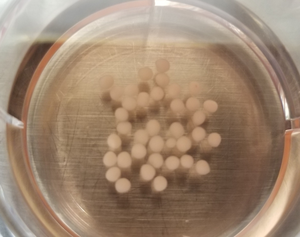 A model that mimics the malformation associated w

Focal cortical dysplasia is a malformation of the cerebral cortex associated with one of the most severe types of epilepsy. Treatment is difficult due to lack of effective drugs or access to surgery. A new human model developed by researchers at the University of Campinas (UNICAMP) in the state of São Paulo, Brazil, using organoids cultured from patient cells has now opened up opportunities for testing therapies and drugs more specific.

In partnership with a group from the University of California, San Diego (UCSD) in the United States, researchers have for the first time created cortical organoids mimicking focal cortical dysplasia and identified mechanisms that may be involved in the emergence of the abnormality during the formation of the brain. . They also obtained electrical readings resembling the typical neural discharge of epileptic seizures in humans.

The results are reported in an article in Brain, a leading journal of clinical neurology and translational neuroscience. They can serve as a basis for future research to test drugs for patients with severe epilepsy, who continue to have frequent seizures after surgery or after taking prescription drugs for two years.

The organoids were cultured in vitro to simulate the morphology and function of part of the brain from skin cells donated by four patients with severe epilepsy treated at UNICAMP University Hospital (Hospital de Clínicas). The cells were reprogrammed to become pluripotent stem cells and differentiate into neural cells.

Morphological, molecular and functional analysis of the organoids revealed features of this cortical malformation such as impaired cell proliferation, neuronal network hyperexcitability, dysmorphic neurons and the presence of balloon cells, so called because of their shape, with a neuron-like nucleus and cytoplasm similar to that of an astrocyte.

“We observed molecular alterations consistent with what was expected in cellular pathways associated with neuron development and maturation. We have also shown that it is possible to create a cortical organoid with electrical activity resembling the neuronal discharges observed in epilepsy. In sum, our model mimics what we see in patients and can be used in the future to screen existing drugs,” Iscia Lopes-Cendesprofessor at the UNICAMP Faculty of Medicine and penultimate author of the paper, said FAPESP Agency.

The study was conducted during the doctoral research of Simoni Avansini under the aegis of the Brazilian Institute for Neuroscience and Neurotechnology Research (BRAINN), a Research, Innovation and Dissemination Center (INCD) funded by FAPESP. The study also received funding from FAPESP via three other projects (17/50404-1, 19/09090-9 and 18/02967-0).

Animal models are of limited use in studies of this type of epilepsy because the cerebral cortex in rodents, for example, is very different from the human cortex and does not show similar malformations. “In the field of epilepsy, this is a very important study. Various attempts have been made, with successes and failures, over a period of several years. The result is a major reward for Simoni’s perseverance, a key quality in research,” said BRAINN Principal Investigator Lopes-Cendes.

Epilepsy is an incurable neurological disease that affects some 50 million people worldwide, according to the World Health Organization (WHO). About 2 million cases have been reported in Brazil.

Patients with severe epilepsy may have 40 to 50 seizures a day, lose consciousness and collapse. Treatment involves a combination of drugs, which don’t always work. Most drugs inhibit neuron activity in a generalized way, controlling seizures but with many side effects, such as drowsiness and memory problems. Surgical removal of part of the brain is indicated in approximately 40% of patients with refractory seizure disorders after taking medication for one year.

Uncontrolled seizures not only have a very detrimental effect on the patient’s quality of life, but constitute a major risk of sudden premature death, which can be up to three times the average for the general population. In addition, about half of all adults with epilepsy have other disorders such as depression and anxiety (More than: www.who.int/publications/i/item/epilepsy-a-public-health-imperative).

“We were able to mimic the development of the neocortex and some features of focal cortical dysplasia,” Avansini said. “The advantage of our method was that we used a human model that maintained the patient’s genetic heritage. With an organoid, it is possible to study each stage of the malformation, which begins with the development of the cortex, with repercussions on cell proliferation and differentiation.

The literature is unclear as to how abnormal cortical development contributes to the creation of epileptic seizures in dysplastic cortical tissue. Previous research by the group, from Avansini’s PhD and reported in a 2018 paper, suggested that dysregulation of gene expression NEUROG2important for the differentiation of neurons and glial cells (astrocytes, oligodendrocytes and microglia), plays a key role in disease development (More than: agencia.fapesp.br/27809).

The researchers used skin cells from four patients who had not responded to drug or surgical treatment. One of them had undergone three surgeries, which resulted in less frequent attacks but did not achieve the expected result. The other three had undergone two operations and included a child who started having seizures at 14 months and whose speech was partially impaired.

“Our data indicate a molecular disruption in cells of the neuroepithelial junction affecting how certain neurons form the cortical plate, leading to alterations in the neural network that make these patients susceptible to epilepsy,” Alysson Muotriprofessor at UCSD and last author of the Brain paper, said in a video about the study.

To capture the electrical data, the scientists used two techniques, one of which was an innovation in this area of ​​research and involved inserting specially designed electrodes into the organoid. They succeeded in working with organoids that are three to five months old, which are difficult to cultivate because most organoids die quickly due to lack of a vascular system.

“We are driven by challenges,” Avansini said. “A relative of mine suffered from epilepsy and died of a seizure. When you go through something like this, you know exactly how the families of the patients feel. That’s what makes me vibrate. Our group has made progress in many ways, but there is still much to do and research continues.

The next steps, she explained, are to try to better understand the development of epilepsy, to focus on the proliferative region to study cell and circuit formation, and to test whether interventions are feasible in the system in the context of new therapies.

“Our INCD is fulfilling its mission to produce good science and to train independent researchers who will continue to do good science,” Lopes-Cendes said.

The São Paulo Research Foundation (FAPESP) is a public institution whose mission is to support scientific research in all areas of knowledge by granting scholarships, fellowships and grants to researchers linked to educational institutions University and Research from the State of São Paulo, Brazil. FAPESP is aware that the best research can only be done by working with the best researchers at the international level. Therefore, it has established partnerships with funding agencies, higher education institutions, private companies and research organizations in other countries known for the quality of their research and has encouraged scientists funded by its grants to further develop their international collaboration. You can find out more about FAPESP at www.fapesp.br/en and visit the FAPESP press agency at www.agencia.fapesp.br/en to keep abreast of the latest scientific advances that FAPESP helps to achieve through its many programs, prizes and research centers. You can also subscribe to the FAPESP press agency on http://agencia.fapesp.br/subscribe.

The title of the article